The surface of Io, moon of Jupiter - Voyager-1 / Nasa image

Io is Jupiter's most volcanologically active moon, with more than 400 active volcanoes emitting sulfur gases that give it its white-yellow-orange-red colors, when they freeze on its surface.

Io, which like our Moon, always faces Earth from the same side, has volcanic activity due to the process of "tidal heating": its non-circular orbit and the gravitational pull of Jupiter's other moons cause large amounts internal friction and heat. Io has an atmosphere, extremely thin (a billion times thinner than the Earth's atmosphere), which can give us information about its volcanic activity. When Io passes in the shadow of Jupiter, and is no longer directly exposed to the sun, the cold conditions cause the sulfur dioxide to condense. Only gases emitted by volcanic activity are then present in the atmosphere. Using the resolution and exceptional sensitivity of ALMA / Atacama Large Millimeter Array, an international astronomical installation, we were able to highlight the plumes of sulfur dioxide, and sulfur monoxide emitted by volcanoes. It has also been argued that the atmosphere of Io was produced 20-50% by active volcanoes.

Another gas, potassium chloride, has been discovered in areas without these sulfur gases, showing that magmatic reservoirs are different under other volcanoes in Io.

Thanks to images taken from the Atacama, we see for the first time the direct effect of volcanic activity on the atmosphere of a satellite of Jupiter.

Subsequent measurements, over a longer period, will make it possible to determine the temperature prevailing in the lower atmosphere of Io.

This video, to be opened in full screen, shows images of Jupiter's moon Io on radio (made with ALMA) and in optical light (made with the Voyager 1 and Galileo missions). The ALMA images were taken when Io passed in the shadow of Jupiter in March 2018 (eclipse), and from the shadow of Jupiter in the light of the sun in September 2018. These radio images show for the first time plumes of Sulfur dioxide (in yellow) rising from volcanoes on Io. Credit: ALMA (ESO / NAOJ / NRAO), I. de Pater et al .; NRAO / AUI NSF, S. Dagnello; NASA The space probe Cassini, part of the Earth in 1997, will soon be out of fuel, after twenty years of services around Saturn, its rings and its moons.
Last April, the probe changes its last trajectory. Its new orbit will send it between the inner rings and less than 2,000 km from Saturn. While analyzing what it perceives, it will run to its programmed loss on September 15, entering and consuming itself in the Saturnian atmosphere.
This suicide is a necessary passage because NASA does not want that, if its probe remains in orbit, it does not end up crashing on one of the moons and deposits microbes and terrestrial bacteria in a place potentially sheltering an extraterrestrial life. During these two decades, the orbiter Cassini allowed the exploration of Saturn, its rings and its moons. Among the most astonishing discoveries, the mission allowed to follow a mega storm on the giant gaz planet, caught by astonishing clichés of the planet and its rings, revealed the existence of ice plumes on the surface of Enceladus, and the number of moons; thanks to its passenger, the European probe Huygens, it has made discover the wonderful world of Titan, where rivers of methane enters a sea of ​​the same composition.

Crashing into Saturn / via Nat Geo

Water vapor traces were detected in November 2012 by Herschel Space Telescope, from ESA, on the surface of Ceres.

With 950 km in diameter, Ceres is the smallest dwarf planet in our solar system, but the biggest space object in the main asteroid belt between Mars and Jupiter.

Released in 2007, the Dawn spacecraft of NASA revealed in January 2015 strange white spots on the surface of Ceres. In gradual descent toward the dwarf planet, Dawn will spend from 46,000 km, altitude of revelation the white spots, to 375 km, its lowest altitude at the end of the mission in December 2015. Ceres position in our solar system between Mars and Jupiter This is one of many bright spots intriguing the scientists since the early observations; it is supposed to be a great cryovolcano, a "cold volcano", which stretches over 17 km and dominates the surrounding land of 4,000 meters ... it would be older than a hundred million years.

Instead of spitting lava, as effusive volcanoes, Ahuna eject actually ice, which gradually formed the dome with smooth, shiny walls.

Take a flight over dwarf planet Ceres in this video made with pictures from NASA's Dawn spacecraft. The simulated flyover Was Made by the Mission's camera team at Germany's national aeronautics and space research center (DLR).

A second mystery : by modeling the asteroid collisions that would have occurred during the 4.5 billion years of history of Ceres, the scientists conclude that the dwarf planet should have 10-15 craters over 400 km wide and at least 40 of over 100 km.

But the observations by the Dawn spacecraft show only six craters over 100 km and less than 280 km wide. The explanation of erosion craters come from the structure of the planet : the top layers of Ceres contain ice mixed with salt, likely to "relax with the times" and to soften the reliefs. The  internal heat released shortly after the formation of the planet would have helped the ice in surface to erase the impacts. 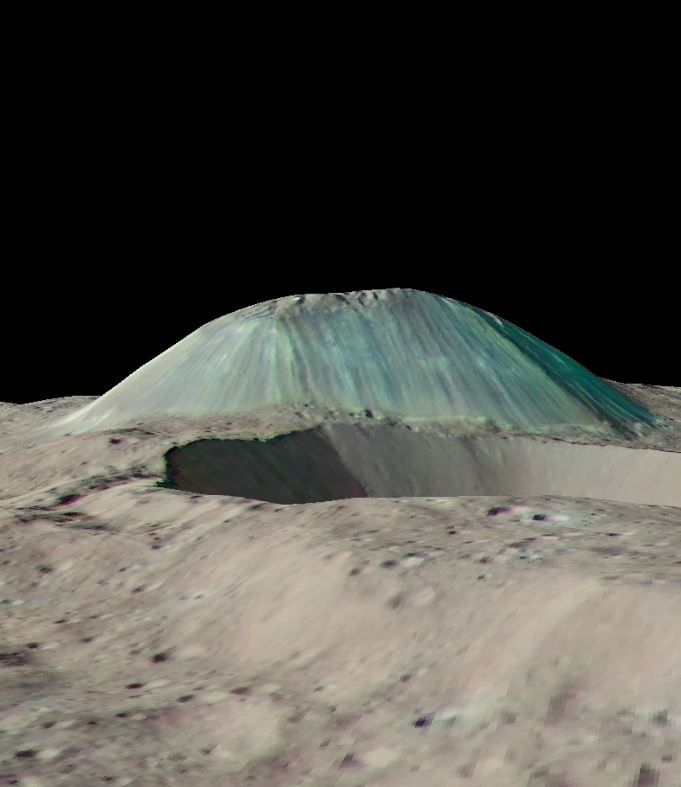 The scientific interest of Ceres has strengthened since the Dawn probe joined her, and NASA has just extend the mission around the dwarf planet rather than sending it to another asteroid.