In Popocatépetl, in the past 24 hours, 74 exhalations have been identified thanks to the surveillance system, accompanied by volcanic gas emissions, small quantities of ash and sometimes incandescent fragments. Night glow is observed.

During the day, we see the constant emission of volcanic gases and sometimes slight amounts of ash, which are dispersed to the northwest.

The activity was a little more intense in the evening, with an explosion at 10:40 pm, and the ejection of incandescent materials on the upper slopes.

This activity remains under the Amarillo Fase 2 alert. A strongly felt earthquake in Mayotte in the order of M5.8 was recorded on March 21, 2020 at 06:42 UT (09:46 local time Mayotte) by the Mayotte volcanological and seismological monitoring network (REVOSIMA). The epicenter was located this time between the islands of Mayotte and Anjouan, 50 km NW of Mayotte and 30 km deep.

To illustrate the order of magnitude, it had the same intensity as the strongest earthquake felt in May 2018. It was less felt, due to the distance and its depth.

Up to now, the epicenters of earthquakes have been located east of Mayotte, and originate from two areas of magmatic flux emission.

It remains to determine the exact nature of the earthquake In the Reykjanes Peninsula, on March 20, at 8:30 p.m., an earthquake swarm started with Krysuvik. By midnight, 60 earthquakes had been detected in the region. The biggest M3 happened at 9:21 p.m. No reports were received. Then the activity decreased.

The latest deformation results around Mt. Thorbjorn indicate that inflation causing an uprising in the region has resumed. The uprising is slower than when it was measured in January, but seems to be in the same place. The most likely explanation for the signal is that the influx of magma has started again.

Uplift at Yellowstone and how it does NOT mean an eruption is coming - Dr. Janine Krippner and Mike Poland.

To fill this period of confinement, and for those who master English, you can follow on YouTube a series by Dr. Janine Krippner entitled "Volcano moments", including an example above.

Interviews with volcanologists on different volcanic or seismic subjects, by following this link: https://www.youtube.com/playlist?list=PLjrF2J-wVC2OreS8nFgTgVZ5fnxymyQi3 In Vanuatu, Yasur activity is on the rise, with explosions in progress and emission of gases and / or volcanic ash observed. Villages near the volcano are likely to be impacted by ash falls and volcanic gases in an area NNW, current direction of the winds.

The volcanic alert remains at 2; the danger to life zone remains within the limits of danger zone A, approximately within 600 meters around the cone. 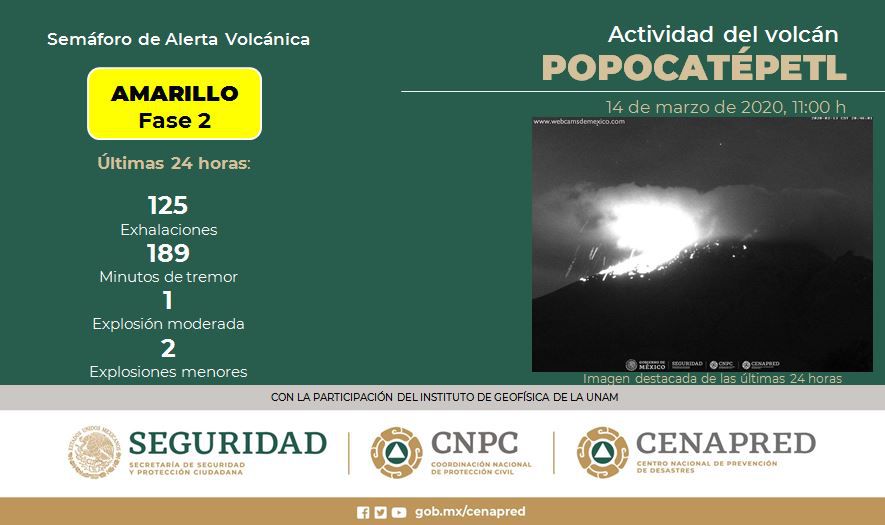 Over the past 24 hours at Popocatépetl, Cenapred has identified 125 exhalations, accompanied by gas, water vapor and little ash, as well as explosions, including two minor around 11:07 p.m. and 4:05 a.m., and a moderate, the 14.03 at 8.45 p.m. All the explosions were responsible for a plume of about 1,500 meters, dispersing to the northeast, and for ejecting incandescent materials at a medium distance from the crater.

Between these episodes, gas emissions, and slight amounts of ash are reported.

Tremor was recorded for 189 minutes.

AVO raised the alert level of the Shishaldin to Watch and the aviation code to orange this March 14 at 10:31 pm, following the observation on a high resolution satellite image of lava, and of what appears to be a new cone in the summit crater.

A weak tremor is also detected.

This increase is justified by a possible continuation of the activity, with little or no warning signs, resulting in lava flows outside the crater, lahars and ash clouds at low altitude. 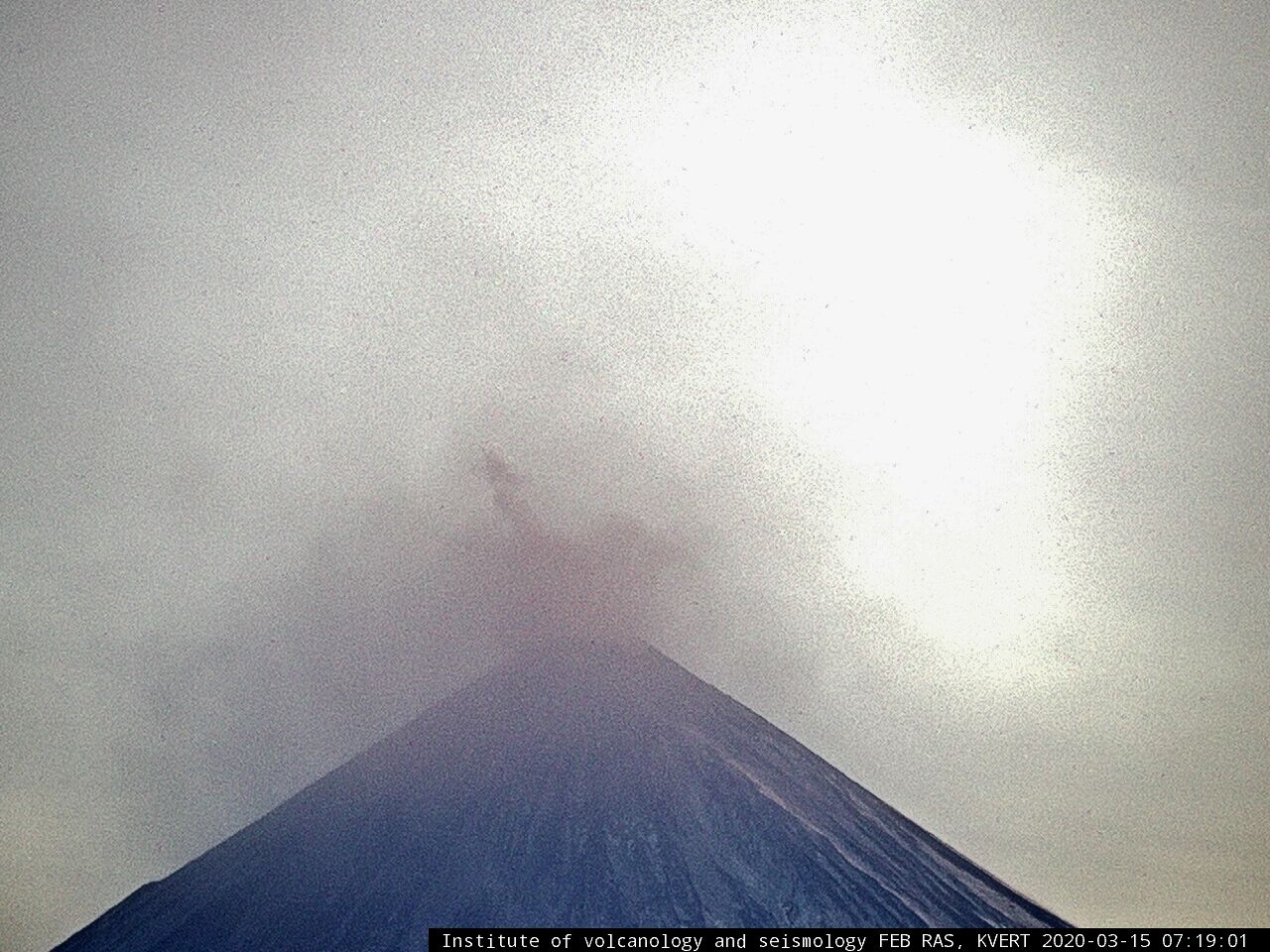 Strombolian activity continues at Klyuchevskoy on March 15, with an ash explosion reaching 5,500 meters asl. The ash and gas cloud drifted 170 km towards the ENE.

The aviation code remains orange, due to possible ash explosion between 5,000 and 7,000 meters asl. anytime The seismic swarm that started on March 12 northeast of Grindavík on the Reykjanes Peninsula is still in progress, but the intensity of the swarm has decreased since the start.

Many minor earthquakes are still detected in the region. At the start of the swarm, an M5.2 earthquake occurred approximately 5 km NE of Grindavík. During the first day of the swarm, eight more earthquakes above M3.0 were detected. Uplift is no longer observed in the area, which is likely due to the cessation of the influx of magma. The phase of uncertainty declared by the Civil Protection is still in force.

Popocatépetl activity and seismic news from Reykjanestá and Madeira. 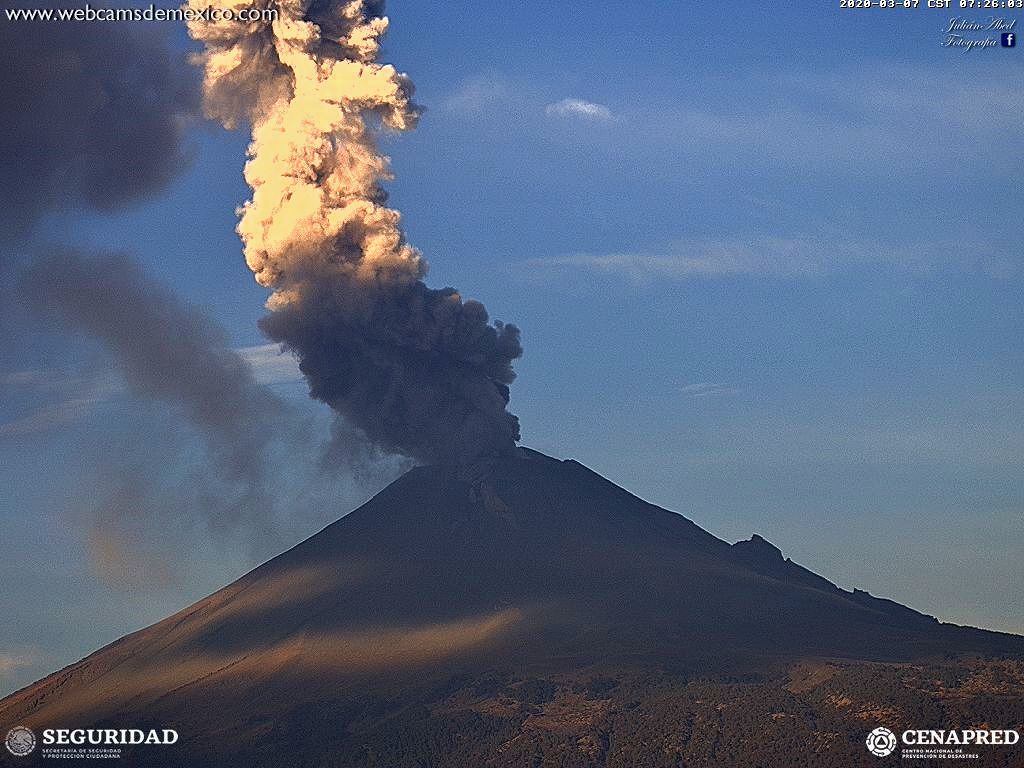 The Cenapred informs during the last 24 hours to Popocatépetl 189 exhalations, some of these events were accompanied by gas emissions and slight amounts of ash. and three minor explosions recorded yesterday at 7:30 p.m., 9:20 p.m. and March 7 at 7:23 a.m. At the seismicity level, 215 minutes of tremor were also recorded

Since this morning and until the time of this report at 11:15 a.m., volcanic gas emissions and slight amounts of ash have been presented which are scattered towards the northeast. The news of volcanic areas is rather summarized at this time by news of the developed seismicity.

In the Reykjanes Peninsula, seismic activity continues at the southwestern tip of Reykjanestá since February 15. We distinguish on March 6 at 4:55 pm an earthquake of M 3.1.
Earthquakes have greatly decreased near Thorbjorn, but the status unquestionably promulgated by the Civil Protection remains current.
IMO always advises against excursions to the Eldvörp region. 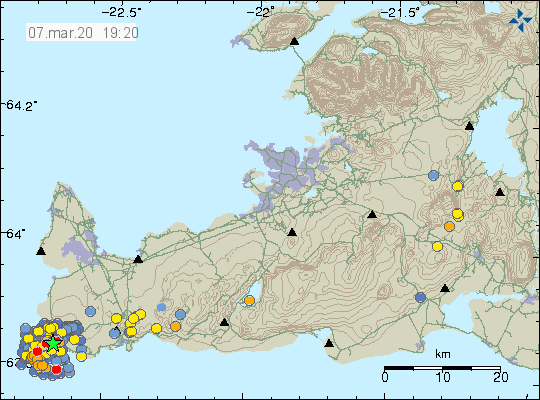 On March 7, 2020 at 8:58 p.m. (Canary time), the seismic stations of the Canaria seismic network (C7) of the Canary Volcanological Institute (INVOLCAN) recorded an earthquake of magnitude 5.5 according to the Spanish Geographic Institute and M 5.2 according to EMSC (Euro-Mediterranean seismological center) and NEIC (National Earthquake Information Center).

The epicenter of this earthquake is located in the Madeira archipelago, about 50 kilometers south of Funchal, and was very clearly felt on the islands of Madeira and Porto Santo Santo. This seismic event was felt with less intensity also in Lisbon, as well as in the islands of Tenerife and La Palma, located approximately 1,000 and 380 kilometers from the epicenter respectively.
Another shake of Ml4.3 is reported at 9:22 p.m. by the IGN. 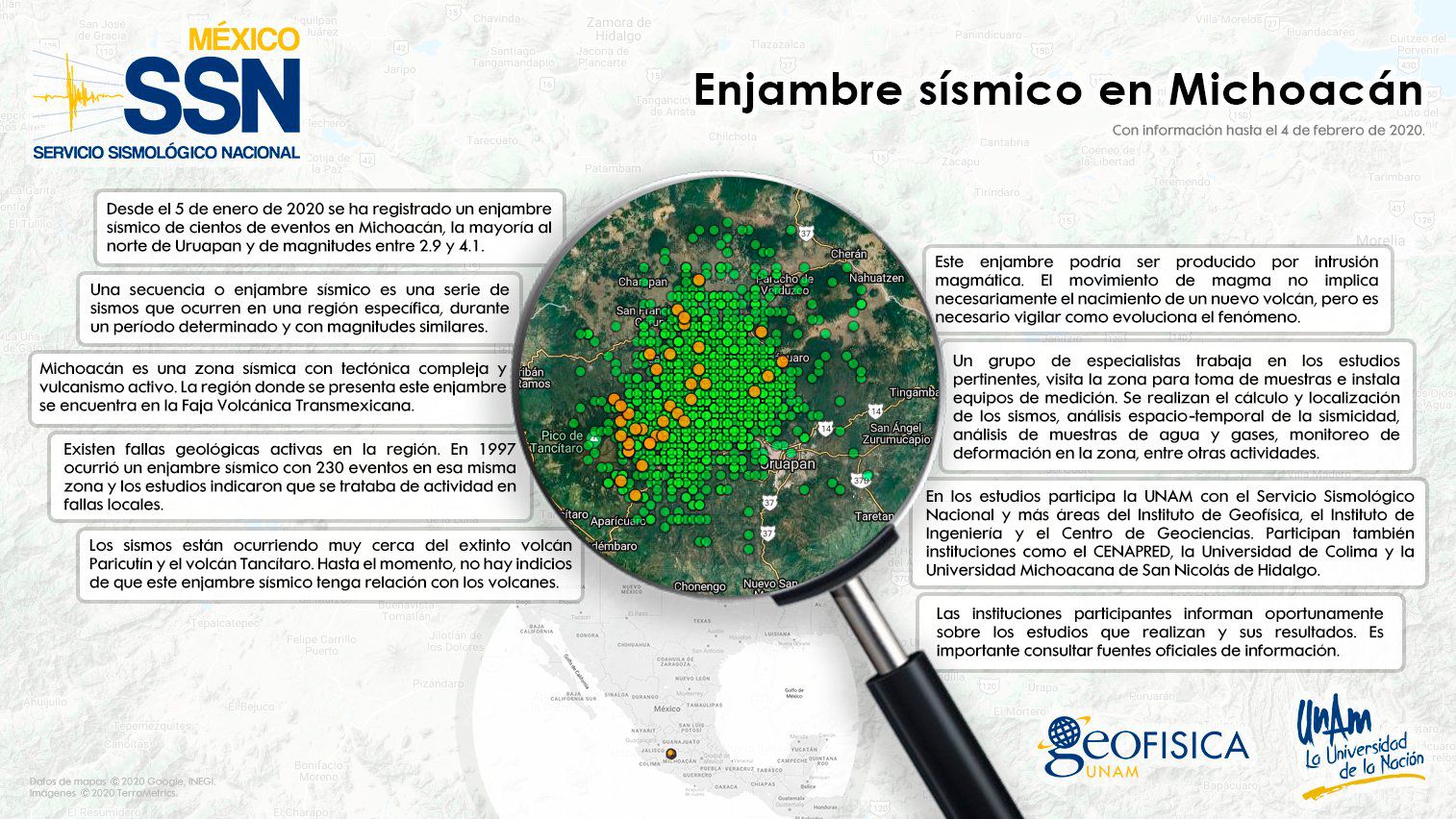 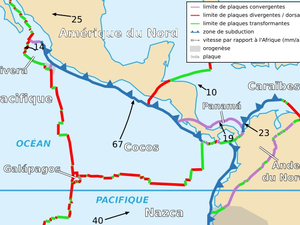 Seismicity highlights the stages of the formation of the underwater volcano off Mayotte.

A joint study by the German Center for Geoscience Research / GFZ and the Institute for Research in Astrophysics and Planetology, entitled "Drainage of a deep magma reservoir near Mayotte inferred from seismicity and deformation", examines the seismicity associated with the seismic crisis that started in June 2018.

It highlighted magmatic movements under the seabed, before and during the eruption of this new volcano off the island of Mayotte.

More than 7,000 volcano-tectonic earthquakes and 407 earthquakes of very long period were studied with new techniques adapted to compensate the lack of instrumentalization (before the MAYOBS 1 campaign with the Marion Dufresne). The first earthquakes responded to the propagation of a magmatic dyke from the depths of the Moho to the surface.

From June, VLP signals, lasting 20-30 minutes and so powerful that they could be recorded a thousand kilometers away, appeared ... while the subsidence of the soil at Mayotte was measured by GNSS.

The study authors interpret this as a sign of the collapse of the large deep magma chamber, more than 3.4 km³ at about 30 km deep, following its emptying.

The eruption could not be noticed at the start, the seabed being 3 km below the surface. 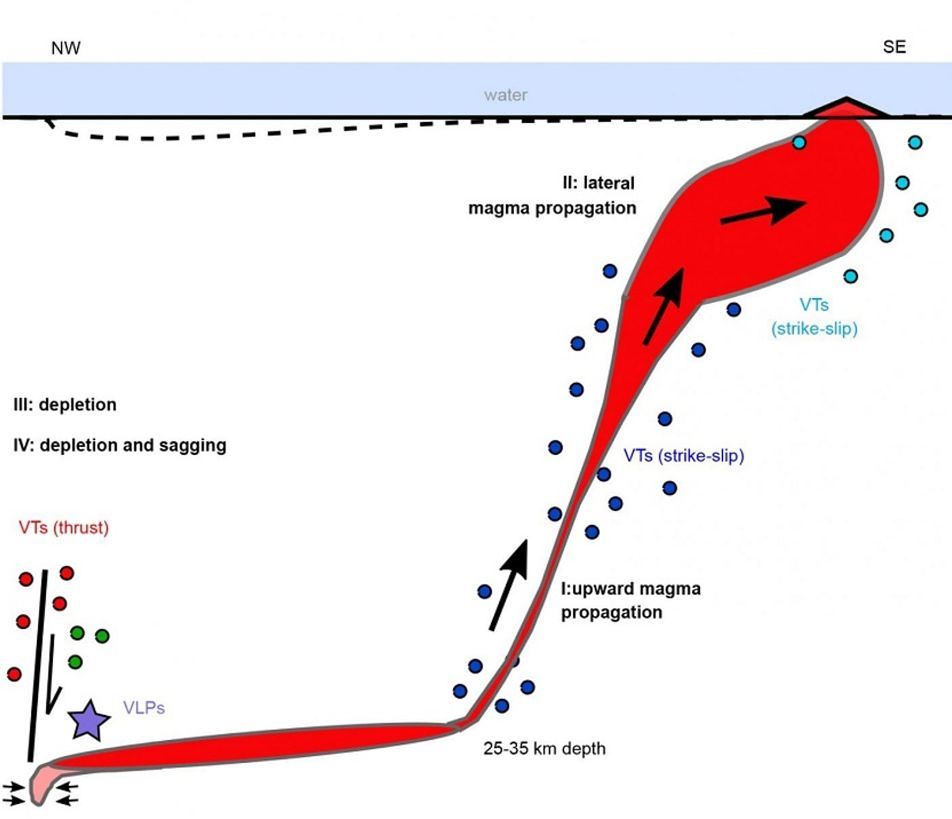 The earthquakes continue, even if we speak less: according to data from the RéNass / National Network for seismic monitoring, January 1 was marked by 7 earthquakes, including one of M 4.8. This January 8, an earthquake of MLv 1.8 was noted.

- CNRS - Espace Presse 07.01.2020 - Volcano off Mayotte: seismicity sheds light on the stages of its formation - link