The eruption of Tambora ... two hundred years ago -1 - the course of the eruption. 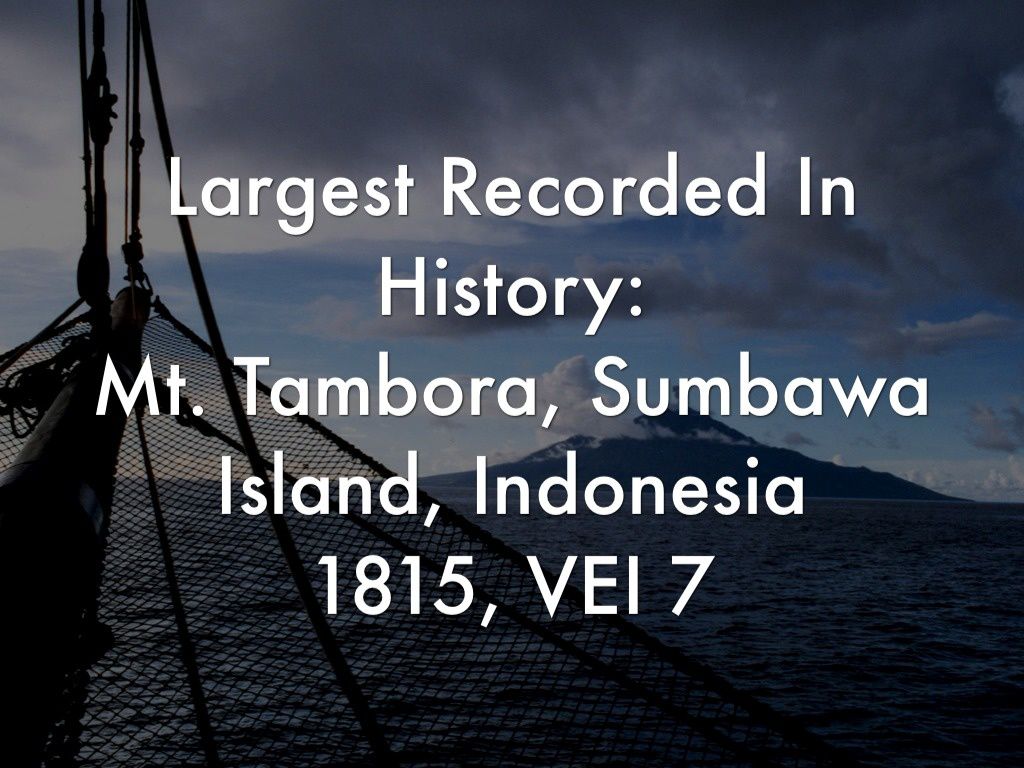 There are two hundred years, Sumbawa, an island in the group of the Lesser Sunda islands in the Indonesian archipelago, was hit by one of the largest eruptions in the modern times ... The Tambora, this large stratovolcano that forms the peninsula Sanggar, entered in eruption after a period of calm that had lasted since the 8th century. This eruption will decapitate the volcano : his height pass from 4,300 meters before the cataclysm to 2851 meters, and form a caldera with a diameter of 6 km, 1,250 meters deep.. Described as a rare volcanic explosivity index of 7, it will be about six times more powerful than that of Mount Pinatubo in 1991, or four times that of Krakatoa in 1883. Considered as the deadliest eruption of the last 10,000 years, it have local and global climate impact. 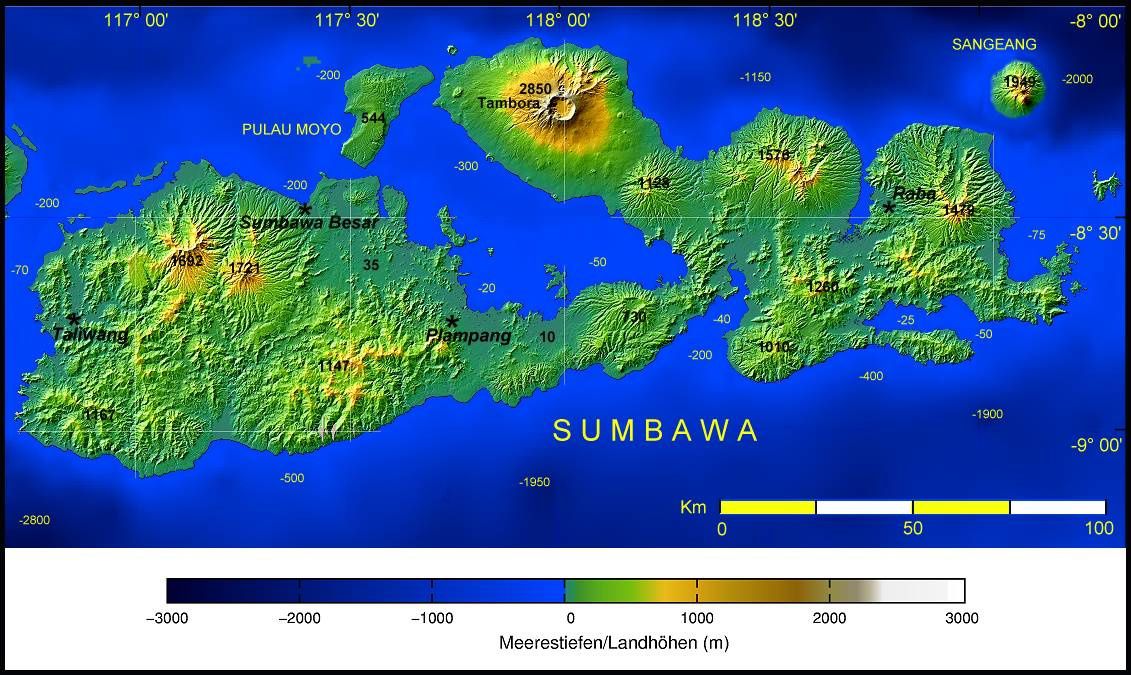 Before we examine the consequences, see the unfolding of this extraordinary eruption.

The volcano did not wake up without warning ... the activity starts to manifest by earthquakes felt, a year before the eruption, to Australia (Self et al. 1989)

On the evening of April 5, 1815, a short Plinian eruption, accompanied by explosions heard to Makassar on the island of Sulawesi, and Batavia (now Jakarta) on Java, lasts two hours. It propels a plume of ash to 33,000 meters high. On April 6, most numerous explosions are recorded and ashfall reported on Java.

After a few days of relative calm, the second phase of the eruption began on April 10, to 19 hours ... much more powerful. Three pillars of fire rise and merge into 20-21 hours (three vents that will merge to form one) then it is the whole mountain ablaze !  Pumice rain down, some up to 20 cm in diameter, and the ash takes over. This paroxysmal energetic Plinian phase will last very little time and produce an eruptive column of 30-43 km., according to different sources. Towards 22-23 hours, high winds are reported, which may coincide with the collapse of the Plinian column. The successive flows and pyroclastic surges covering the Sanggarr peninsula and destroy the village of Tambora. A tsunami of up to four meters affects most Indonesian islands.

April 11, loud explosions are heard over 2500 km. The ash fall on West Java and Sulawesi. A second tsunami, lower, is noted on Madura, north of Java.

The explosions cease on April 15, but ash cloud continues to surround the volcano until April 23.

Isopacks of Tambora ash fallout, covering South Sulawesi, Bali, Lombok, East Java and southern Borneo. - The base map was taken from NASA picture and the isopach maps were traced from Oppenheimer (2003). Stratigraphy of the deposits from the eruption of Tambora in 1815 - doc.Sigurdsson "Lost Kingdom of Tambora" / Armstrong Sompotan.

During 2 to 3 days, the darkness is total within 600 km. accompanied by tropospheric cloud of an air pocket hot at first, then very cold, as reported to Banjuwangi, at 400 km. of the volcano. These cold temperatures were recorded in India, two weeks later.

The erupting volume is estimated of 160 cubic kilometers of ejected trachy-andesitic pyroclastic materials. To better capture the volume, ash statements in Makassar / Sulawesi had a density of 636 kg / m². Near the volcano, the thickness of the deposits reached thirty meters.

At sea, the rafts of pumice and ash agglomerates, reach up to 1 m. thick on several kilometers wide, and will hinder the navigation during several years.

Ash and gas reached the stratosphere : the coarser ash particles begin to fall within 1 to 2 weeks, but the finer remain several months to several years in the atmosphere at an altitude of between 10 and 30 km .

The number of victims depends on the sources: in addition to 10,000 direct victims of  pyroclastic flows, it is estimated that on Sumbawa, 38,000 people died of deprivation and 10,000 on Lombok (Zollinger 1855). Another source gives 48,000 and 44,000 deaths respectively on Sumbawa and Lombok (Petreschevsky 1949). Additional victims number in Bali and East Java because of the famine. Oppenheimer change the total number of victims in 2003: at least 71,000  ! Only a good year after the eruption, a detailed report of the disaster is published by Sir Thomas Stamford, naturalist and English governor of Indonesia, in his "History of Java" (1817). It will be incorporated in the "Principles of Geology" of Lyell in 1850.

“Island of Sumbawa, 1815. – In April, 1815, one of the most frightful eruptions recorded in history occurred in the province of Tomboro, in the island of Sumbawa, about 200 miles from the eastern extremity of Java.
In the April of the year preceding the volcano had been observed in a state of considerable activity, ashes having fallen upon the decks of vessels which sailed past the coast. The eruption of 1815 began on the 5th of April, but was most violent on the 11th and 12th, and did not entirely cease till July.
The sound of the explosions was heard in Sumatra, at the distance of 970 geographical miles in a direct line; and at Ternate, in an opposite direction, at the distance of 720 miles. Out of a population of 12,000, in the province of Tomboro, only twenty-six individuals survived.
Violent whirlwinds carried up men, horses, cattle, and whatever else came within their influence, into the air; tore up the largest trees by the roots, and covered the whole sea with floating timber. Great tracts of land were covered by lava, several streams of which, issuing from the crater of the Tomboro mountain, reached the sea.
So heavy was the fall of ashes, that they broke into the Resident’s house at Bima, forty miles east of the volcano, and rendered it, as well as many other dwellings in the town, uninhabitable. On the side of Java the ashes were carried to the distance of 300 miles, and 217 towards Celebes, in sufficient quantity to darken the air. The floating cinders to the westward of Sumatra formed, on the 12th of April, a mass two feet thick, and several miles in extent, through which ships with difficulty forced their way.
The darkness occasioned in the daytime by the ashes in Java was so profound, that nothing equal to it was ever witnessed in the darkest night. Although this volcanic dust when it fell was an impalpable powder, it was of considerable weight when compressed, a pint of it weighing twelve ounces and three quarters. “Some of the finest particles,” says Mr. Crawfurd, “were transported to the islands of Amboyna and Banda, which last is about 800 miles east from the site of the volcano, although the south-east monsoon was then at its height.” They must have been projected, therefore, into the upper regions of the atmosphere, where a counter current prevailed.
Along the sea-coast of Sumbawa, and the adjacent isles, the sea rose suddenly to the height of from two to twelve feet, a great wave rushing up the estuaries, and then suddenly subsiding. Although the wind at Bima was still during the whole time, the sea rolled in upon the shore, and filled the lower parts of the houses with water a foot deep. Every prow and boat was forced from the anchorage, and driven on shore.
The town called Tomboro, on the west side of Sumbawa, was overflowed by the sea, which encroached upon the shore so that the water remained permanently eighteen feet deep in places where there was land before. Here we may observe, that the amount of subsidence of land was apparent, in spite of the ashes, which would naturally have caused the limits of the coast to be extended.
The area over which tremulous noises and other volcanic effects extended, was 1000 English miles in circumference, including the whole of the Molucca Islands, Java, a considerable portion of Celebes, Sumatra, and Borneo. In the island of Amboyna, in the same month and year, the ground opened, threw out water, and then closed again.
In conclusion, I may remind the reader, that but for the accidental presence of Sir Stamford Raffles, then governor of Java, we should scarcely have heard in Europe of this tremendous catastrophe. He required all the residents in the various districts under his authority to send in a statement of the circumstances which occurred within their own knowledge; but, valuable as were their communications, they are often calculated to excite rather than to satisfy the curiosity of the geologist. They mention, that similar effects, though in a less degree, had, about seven years before, accompanied an eruption of Carang Assam, a volcano in the island of Bali, west of Sumatra; but no particulars of that great catastrophe are recorded.“