The eruption of Tambora ... two hundred years ago - 3 - global effects.

The effects were overall ... "the year without summer"

The eruption released a huge volume of sulphate aerosols, estimated at 175 trillion pounds or {175.1018 - Source E.Klemetti - A trillion is equal to one million to the third power ie a million million million (106x106x106), hence the term.} generating an atmospheric temperature decreases.

It has also disrupted the Jet Stream route over the Atlantic, which changed during four years the climate of the northern hemisphere. 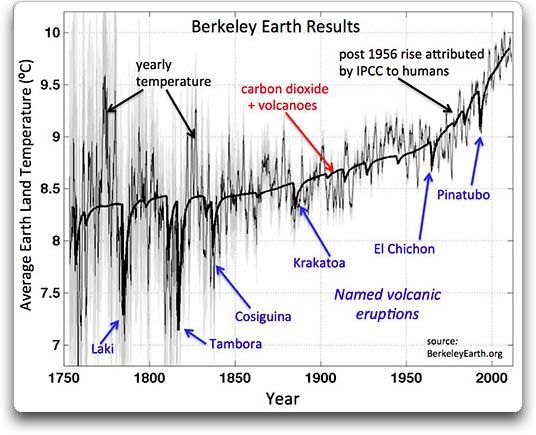 In the spring and summer of 1815, a dry, persistent fog is observed in the NE. of the United States Fog blushed and weakens the sunlight, so that one can observe with the naked eye contours.

The summer of 1816 was marked in the northern hemisphere by extreme conditions, to the point that calls 1816 "the year without summer". Temperatures generally decrease by 0.7 ° C-3 ° C, enough to cause problems for global agriculture for many years. In June, frosts are reported in Connecticut and snow in the states of New York and Maine. These conditions last for the next three months which reduces plant growth period and leads to disastrous harvests.

Many American historians speak of the "Year Without a Summer" as a key motivation for the westward movement and the rapid settlement of what is now western and central state of New York and US Midwest. In New England, many people were victims of the 1816, nicknamed "Eighteen hundred and froze to death", ie "The year 1800 where he froze to death" and there are dozens of thousands of farmers who left for the northern Midwest (which then constituted the Northwest Territories), where they hoped to find a richer soil and better growing conditions for vegetation.

Asia was hit: in China, unusually low temperatures combined with torrential rain did fall rice production in Yunnan, with a famine in the key. In other provinces, the fields were ravaged by the summer frost or snow. Taiwan, however, characterized by a tropical climate, known frost and snow.

Europe has experienced this "volcanic winter" : cold and rainy, snowy winters ... followed by the flood of large rivers and floodings, crop failures, famine and typhus epidemic ... The continent, not yet restored of the Napoleonic Wars knew subsistence riots, with looting grain stores. This decline reached 1 to 1.5 ° C below normal in the British Isles. (Oppenheimer 2003), where the summer is cold and wet - rain and snow fell incessantly in July 1816 - leading to a lack of harvests and famine. Typhus hit many villages in England and Scotland. In Ireland, nearly 800,000 people are infected with the epidemic and 4,300 die of the combined ravages of starvation, dysentery and fevers.

In Hungary and Italy, there are reports of red-brown snow events throughout the year ... the case is volcanic ash in the atmosphere.

Switzerland, private of access to the sea and supply, experienced a famine and subsequent violence as the government declared a state of emergency. It is estimated that the mortality rates in 1816 were two times higher than average, with a total of 200,000 deaths.

The situation is similar in France, in all provinces. Various testimonies coming illustrate it.

On the wall of a house in Heiligenstein, Alsace, we read:
Im Jahr 1817 ist diese Hütte gebauet worden, in welchem ​​Jahr für ein man Furtel Wäissen bezahlte 120 fr für ein Sack Erdapfel 24 fr für ein Wein Ohmen 100 fr. Jacob Stiedel.
(In 1817 the cottage was built and this year we paid 120 francs for a measure of wheat for 24 francs a potato bag, 100 francs for a Ohmen (50 liters) of wine Jacob Stiedel. .)

Nebinger Leonard (born 1794), who was the mayor, tells in his memoirs that terrible year:
"1817 was a year of incredible expensive. A quarter of wheat worth 150 francs. There was some wine and it was sour. Eight days before the harvest snow fell up to half the height of a shoe, so that in many broke the stocks and many trees on the ban of the town and in the forest broke under the snow. That year they could not work the soil vineyards as it had rained. In this quarter of famine, one ohm of Klevener (a white wine Alacien) of 1811 was worth 80 francs, a wheat quarteau 150 francs, a potato sack 24 francs, a measure of beans 15 to 16 "sous". The farmers market no longer able to know what they were asking, so more than once, when they had exaggerated, people overthrew what they had on their display and the poor, who stood behind them their flying often imitated by German officers who were still in the region. The poor were in the forest, in the cuts were picking herbs, cooked them, hacked them like cabbage and ate them. But all we managed to eat that year did not feed so that people still hungry an hour later. Many people died of starvation in the vicinity of Strasbourg and we found two dead children in a field of clover where they ate young shoots. "

Alsace is marked in 1817 by an unprecedented wave of emigration, with 5191 emigrants in six months, attributed to the scarcity and occupation by Allied soldiers and their horses, more mouths to feed. (Alsatian Emigration to the United States, 1815-1870)

Lecouteur Michel, who studied the aftermath of the eruption of Tambora in its region, reported in an article entitled "Eruption in Indonesia, famine in Normandy"

"After a poor spring, rainy and humid summer of 1816 helped to reduce crop yields, leading to a rise in grain prices, exacerbated by speculation of farmers who had fairly large barns to shelter their crops and their financial reserves to not to hurry to deliver their grain to market, millers, bakers, retail blattiers grain sellers, and other intermediaries.
In autumn 1816 the rising price of wheat is widespread but variable depending on whether or remains in Neufchatel or Forges. If it remains moderate a while in Rouen, it culminates soon in Doudeville and Yvetot.
The manifestations of popular discontent are increasing, especially as factories poach that wool production decreases, causing misery. On the coast, we find that the herring seems to desert the Normandy coast. Fishing, critical resource for many coastal villages, is not good. "The people are suffering," said a police report from November 1816. The sub-prefect appeals to charity, under "the inclemency of the seasons, the stagnation of trade and the fishing defect" Even misery around Saint-Valéry, while in Havre is stressed "the gravity of the situation, the bad harvest and the doldrums of other forms of activity."

{...} It was not until the first quarter of 1818 as the supply of food is sensitive. Prices remained high but confidence had returned, and police action asserted their effectiveness. Rouen, from 16 January, the price of bread was far from 5 cents a pound down to 3 under 3 cents. However, if the situation improved in March, the Attorney General points out: "Many workers are busy, but their salaries have fallen so low that it does not have enough to feed themselves and their families .... »

The Normans health is affected: Dr. Bartholomew Artus Vingtrinier, doctor of Epidemics, notes that in 1817 and 1818 an epidemic affection raged in Le Havre. The symptoms were: "pain in the limbs, loss of strength, precordial anxiety, rumbling, nausea, belching, vomiting materials bilious green or profuse watery diarrhea; intense thirst, dry mouth, bitter scanty urine, burning; most often, happy ending, but long convalescence; members hardly resume their force. ". He said the most likely cause is sudden and frequent alternatives in temperature which took in these two years.

Another doctor, Dr. Lemercier, studied him CBPP outbreak that hit in April 1816 over Lignières-la-Doucelle, a town near Carrouge. "The disease, says Dr. Lemercier in a report dated June 1, 1816, began to show in the town of Lignères about April 15. During this month, the air was alternately wet and dry, high winds blew, the rigors of winter have reappeared in the last fortnight. The contrast of the hot sun and cold and humid atmosphere caused chest inflammations, pleurisy, catarrh, rheumatism, apoplexy ....
On 27 April, when I arrived in the town, there were 40 individuals dead or dying. Are there was a total of 101 people sick, 42 ​​have died. It was not possible to open the bodies of the dead. "


In a feature story, a letter writer who crossed Burgundy in 1817 noted: "The beggars, many yesterday, are more today. At each relay, a troop of women, children and old men gathered around the car." Another observer, came from the British Isles, remarked, always about Burgundy, that the number of destitute " although important, do attained in any way that those who besiege the traveler in Ireland. "