To complete the serie on the Tambora, it is necessary to examine its evolution before and after the eruption of 1815.

The formation of the stratovolcano:

Based on the revelations of the bicentennial eruption , the former Tambora consists of superimposed sequences of lava flows (about 40%) and pyroclastic deposits. The layers are thick of 1 to 4 meters, laterally discontinuous, and with a dip of 20-30 ° from the center of the caldera.

Many radial dikes of 50 cm. to 3 m. thick, cross the substrate. In the eastern wall of the caldera, some dykes extend from the floor to a few meters from its edge, uninterrupted. A mismatch occurs in the formation, with generally older deposits in the northern areas of the caldera, and younger  in southern and eastern walls. 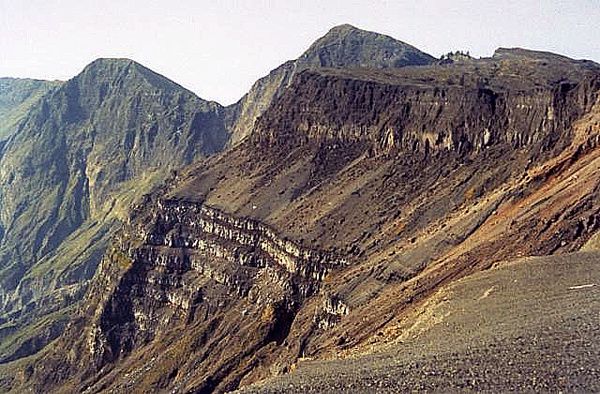 The morphology of the flanks suggests the pre-existence of a large cone (about 4,300 m. High), with a central vent, emitting lava flows that descended the steep flanks. Most pyroclastic have been produced by fragmentation in the eruption, leaving large beds of slag. Intermittent explosive eruptions have produced pyroclastic flows, whose deposits are found in the ravines away. The evolution of the stratovolcano stopped with the formation of a first caldera in the western part of stratocône, approximately 4 to 5 km in diameter and 700 meters deep, asymmetrical to the future caldera of 1815. The formation of this first caldera is supposed to be related to an explosive eruption, or a ignimbritic episode.

This first caldera is partially filled by a series of thick horizontal lava flows confined entirely in the caldera. There are 16 different lava flows, most of 15-20 meters thick, and separated by  scoria and tuff, tick of several meters. In total, these formations are thick from 300 to 400 meters. They do not involve intrusive dykes and are not hydrothermally altered. Their composition is typically  clinopyroxene-porphyritic, often with phenocrysts of plagioclase and olivine.

A brown tuff formation is the last that preceded the eruption of 1815, produced by a subplinienne activity and pyroclastic surge. The deposits are gray-brown to brown, thick of 5 to 10 meters, made up of semi-consolidated tuff in interbedded layers of yellowish-gray pumice and scoria. Proximal deposits, well exposed on the walls of the present caldera, consist of pyroclastic  and pyroclastic flows deposits. Their deposition was influenced by the morphology of the first caldera, not yet filled at the start of the eruption of 1815.

During or just after the formation of the caldera, the edges of it are known various collapses forming debris flows that spread over one or two kilometers on its floor. The floor of the caldera was then covered with sand and gravel from erosion of the walls and mudslides. 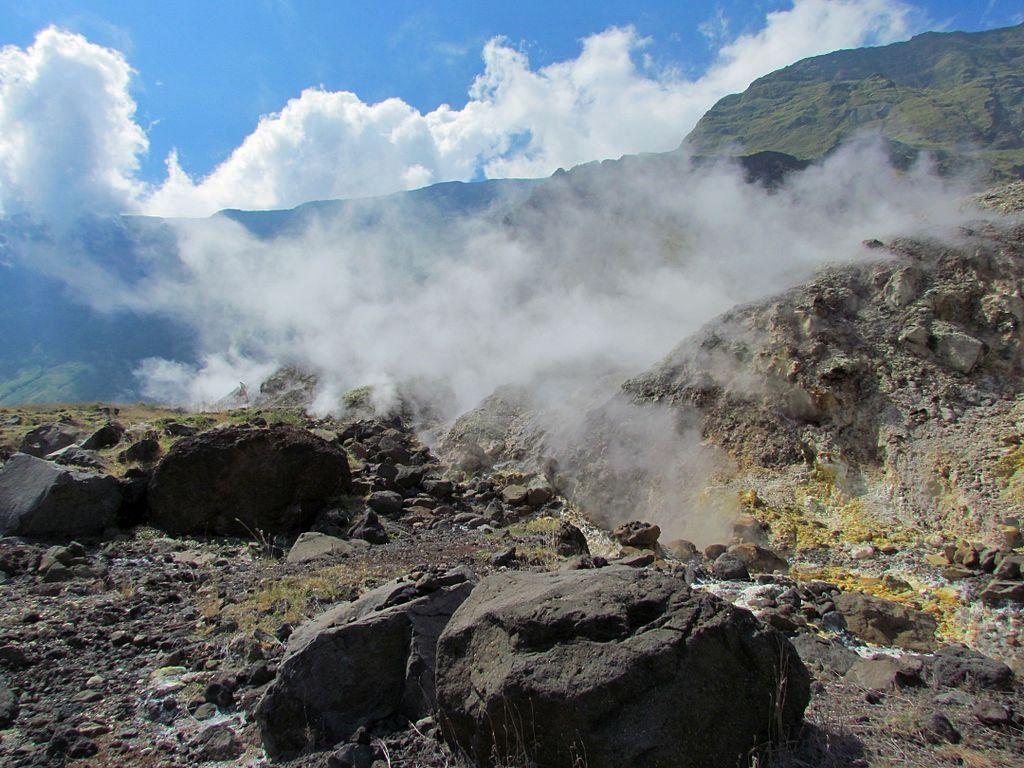 During the 19th and 20th centuries, lava flows and small lava domes were extruded on the floor of the caldera. In 2011, an increase of activity is reported between April and September 8 (PVMBG), with increased levels of Tambora alert to III (increased seismicity, tremor, and emissions of fumes). White plumes high of 50 to 70 m. above the edge of the caldera are reported.

In 2013, the alert level is raised to 2, based on seismic data and visual observations by the PVMBG.