The Messel pit : maar and fossils. In addition to the series over the Vogelsberg and Rhön massive, the Messel pit, which is also of volcanic origin:

The Messel Pit Fossil Site is located 15 km. south of Darmstadt, Hesse Germany. This disused shale quarry is 60 meters deep and measures 1.000 m on 700, which is the extension of the deposit. It is the exploitation of this deposit in the late 1800s to the 1970s, which allowed a group of enthusiasts to discover these fossils. The formation of the Messel site :

The volcanic history of Messel pit starts in the Eocene, there are about 48 million years. At this time, the European continent is not like what we see today : an archipelago, located 10° lower than today, is subjected to intense tectonic. The uplift of the Alps and the Rhine Graben subsidence favored magmatic lifts.

Deep drilling in 2001 established a maar structure as responsible for the formation of Messel pit. Gravimetric, magnetic and seismic reflection analyzes confirmed the hypothesis.

Under the bitumen formation (present to 190m), it was found, from 373 m. depth, a lapilli tuff, whose lower part was deposited at temperatures above 300° C. following a phreatomagmatic eruption. 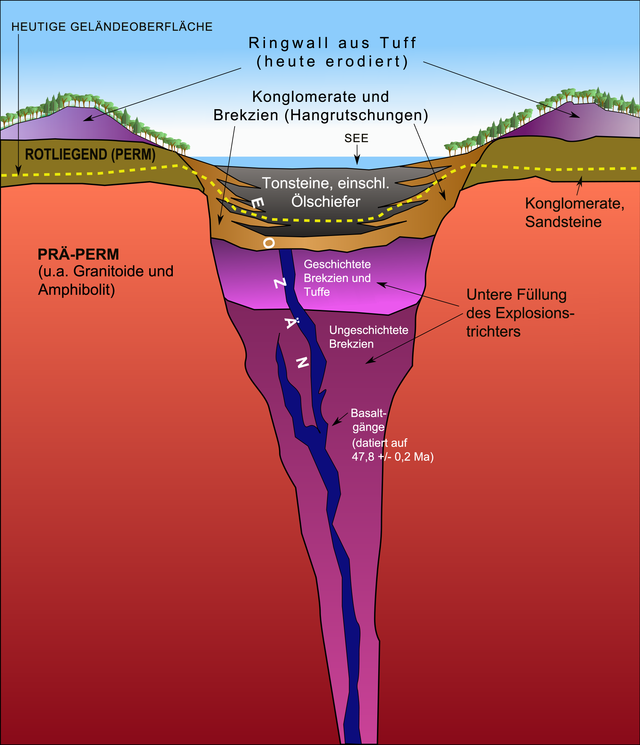 Diagram of passage of the maar stage to that of fossil oil shale deposit - doc. Senckenberg Forschungsintitute und Naturmuseum - A clic for a better vieuw 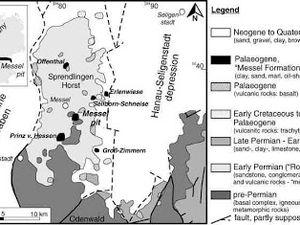 The maar housed a lake,initially filled with volcanic debris, sand and pebbles. The lake formed in an area of ​​subsidence, has undergone a major tectonic activity.

Intermittent movements and / or  volcanism have released gas into the lake and the surrounding atmosphere, killing all living at that time. (many non-aquatic fossils are found: land animals, but also birds and bats). Vegetable and mineral substances there are also accumulated. Dead animals fell into the lake, were caught in the sapropel, a mud rich in decaying organic matter ... and the para-tropical climate of the time favored the fossilisation.

This brings to mind the episode of volcanic Lake Nyos in Cameroon in 1986, where CO2 emissions have killed all life within a few kilometers. High levels of siderite in the Messel oil shale also indicate that CO2 was present in high concentrations in the deep waters. 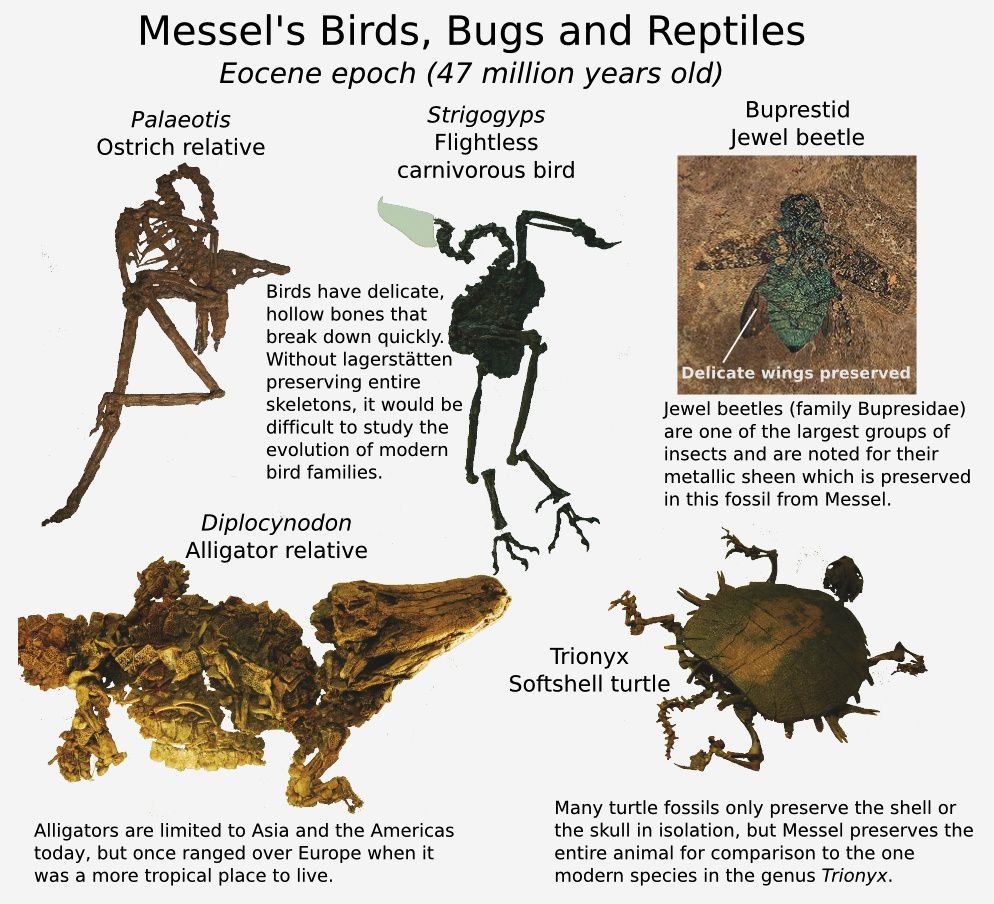 Messel pit - fossils of birds, insects and reptiles from the Eocene - doc. pasttime.org

The fossils of Messel pit :

This site, due to its wealth of fossils, and geological and scientific importance, was ranked in 1995 as World Heritage by Unesco.

The layer of shale, with a maximum thickness of 190 meters, has a lenticular shape, and is between 2 layers of clastic rocks. This argillite, brown to olive green, contains 5-20% oil.

It is called a limnic deposit stagnation, and included a deposit-rich in smectite and algae from seasonal blooms. The ratio of sedimentation is estimated at only 0.1 mm / year. Messel pit provides unique informations about the evolution of mammals, ranging from complete articulated skeleton, footprint skin and feathers, the stomach contents of animals at the time. Was able to reconstruct complex food chains, modes of reproduction, and even the evolution of echolocation with well-preserved fossils of bats; data on the evolution of early archaic horses also coming from the site.

More than a thousand species, especially plants and insects, provide an overview of lake ecosystems that have existed over an estimated one million years ... a real short period !

In the bird kingdom, a giant bird runner, Diatryma, the first large predator appeared after the extinction of the dinosaurs, certify an exchange of fauna between Western Europe and North America in the Eocene.

In May 2014, scientists at the Research Institute Senckenberg of Franfort, who care to search the site was granted in 1991, described the oldest fossil of a bird pollinator (hummingbird). The contents of the stomach well-preserved contained pollen from different plants, indicating a relationship between birds and flowers dating from at least 47 Ma.

The museum Senckerberg Frankfurt houses a splendid collection of these fossils. Left, skeleton of a Diatryma / Gastornis from Wyoming - photo Vince Smith - right, restoring Diatryma / prédatio over a primitive equine - doc. dinozavrikus - a click to enlarge, and a better vieuw.

- Smithsonian  Mag – The evolutionary secrets within the Messel pit - link